Record time retrofit
solutions thanks to
standardisation:
the EnergieSprong challenge

Initiated in the Netherlands, the EnergieSprong programme is now being rolled out in Europe and North America. It consists in generalising energy efficiency improvements through standardisation, allowing faster and less restrictive work.

Some terms are so trivial that you almost forget what they mean. Take the word 'leap', for example: it can be defined as 'the passage to a different degree, state, situation or moment, without transition'. This is what makes the name 'EnergieSprong' - literally 'energy leap' in Dutch - so meaningful. Behind it lies one of the most promising energy efficiency improvement solutions of the moment.

Launched in 2010 in the Netherlands, EnergieSprong is an approach that was initiated by the Dutch government to encourage the rapid and large-scale retrofit of existing buildings. It guarantees a Net Zero Energy (NZE) level over 30 years: after the retrofit, the building produces as much energy as it consumes, and the savings thus ultimately finance the operation. The urgency of such an objective, which is already key to achieve carbon neutrality by 2050 in the European Union, has increased with the soaring energy prices against a background of geopolitical unrest. 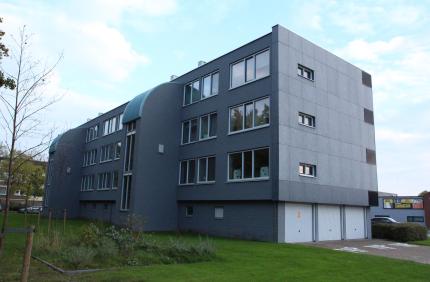 In order to mass-market this type of operation while lowering its costs - the latter have fallen by 50% in 5 years on the Dutch market - the EnergieSprong approach is based on standardisation and industrialisation. These off-site prefabrication processes make it possible to carry out retrofit solutions on an occupied site in a limited time, without having to temporarily relocate the occupants or make them endure months of intrusive work. Depending on the situation, the retrofit can be completed in a few weeks - or even just one.

Whether it is a stand-alone house or a multi-unit building, a retrofit project using the EnergieSprong approach is based on three elements:

The energy unit: a single module groups together the heating system, hot water and ventilation equipment, based on heat pumps and offering mostly double flow ventilation.

Results from the first year

In September 2021, the EnergieSprong Retrofit Solutions Cost, Quality and Impact Observatory delivered the first edition of its barometer to monitor the deployment of projects in France. As a result of international cooperation, the data collected was shared with the EnergieSprong partners in other countries. In terms of energy performance, the pilot projects (public and private) have achieved and even surpassed the net zero energy goal for all uses, including household appliances: energy production is thus greater than energy consumption. Compared to the existing buildings, the need for heating is reduced by 75%.

Supported by the European Union, this international cooperation is based on numerous players involved in each country, both on the supply side (architecture firms, construction companies, research units, manufacturers) and on the demand side (lessors, public authorities). The link between them is made by facilitators responsible for accelerating the implementation of the process. One of them, Sébastien Delpont, runs the Greenflex consulting services as well as the EnergieSprong France programme. According to him, 'we need to get out of this binary vision which consists of either doing few ambitious retrofits or many unambitious retrofits'. He adds: 'We need to explore a third way, which is to do a lot of very efficient and less expensive retrofits, targeting the parts of the estates where this type of industrialised approach is appropriate.'

Not all buildings are suitable for the EnergieSprong approach. Among the energy-intensive housing most affected by this method, Sébastien Delpont cites buildings constructed after the Second World War with low-quality materials.

Since 2017, the EnergieSprong approach has attracted interest far beyond its country of origin, the Netherlands, where more than 5,700 homes have already been improved thanks to this retrofit solution. The approach is now being rolled out in France, the UK, Germany and Italy. Trials are also underway in North America, with projects in New York State and California, as well as in Vancouver and Ontario.

In 2018, the World Green Building Council, meeting in Canada, honoured EnergieSprong by presenting its founder with the Global Green Building Entrepreneurship Award. At the time, the organisation praised 'EnergieSprong's leadership in the global transition to net zero energy buildings'. Time is running out: in the European Union, which has more than 30 million energy-intensive buildings, 85% of current buildings will still exist in 2050, the year by which climate neutrality is to be achieved.