InPulse by Nova is an intrapreneurship program for Saint-Gobain employees. This structure is built to encourage employees to develop startups to accelerate the group’s innovation.

Saint-Gobain’s ambitions are to generate ideas exploring new business concepts that stretch existing strategies to better serve customers; foster innovation culture offering its employees the opportunity to embark on an entrepreneur journey; and benefit from startups’ agility to develop businesses while leveraging the power of the Group through tools, methodology and funding.

The advantages for Saint-Gobain employees are to become entrepreneurs by taking the lead on innovative projects they believe in; explore with Group’s support seizing a real opportunity to turn disruptive ideas into reality; and benefit from incentives while limiting their risk through an equity stake in the Internal Venture.

Saint-Gobain would provide funding and capabilities through NOVA, the arm venture of Saint-Gobain, as well as a legal framework meant to provide the right incentives for employees. 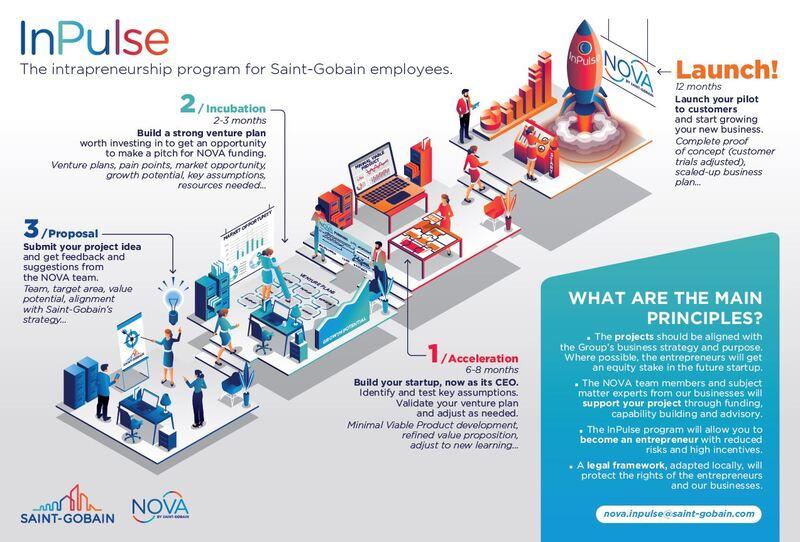 They already did it!

Former Communication and Digital Marketing Manager for ISOVER during 7 years.

Marie happens to be the very first intrapreneur within Saint-Gobain.  She jumped in the first version of the Intrapreneurial program in 2016 and quit the Group 8 months later to dedicated her time to her startup Ecodrop. Saint-Gobain supported her by keeping her on staff, maintaining her salary during the development phase and subsequently entering into the capital of her startup.

Thiago and his colleagues Mateus Castro, were thinking about creating a pet house using the fiber cement board designed to facilitate fitting without using screws or glues. They summited their idea during the 2nd edition of InPulse in Brazil (the country has decided to do a locally annual contest around the program) and they were selected as finalists to integrate the intrapreneurship program.  Now, the project is on the way to get the patent and afterward will be launched into the Brazilian market.