How to build culture... or rather the buildings that shelter cultural works? How can we offer the best, most beautiful, most secure setting for the books, artworks or music scores that enchant us? Overview in 8 emblematic buildings.
A tale of special talents 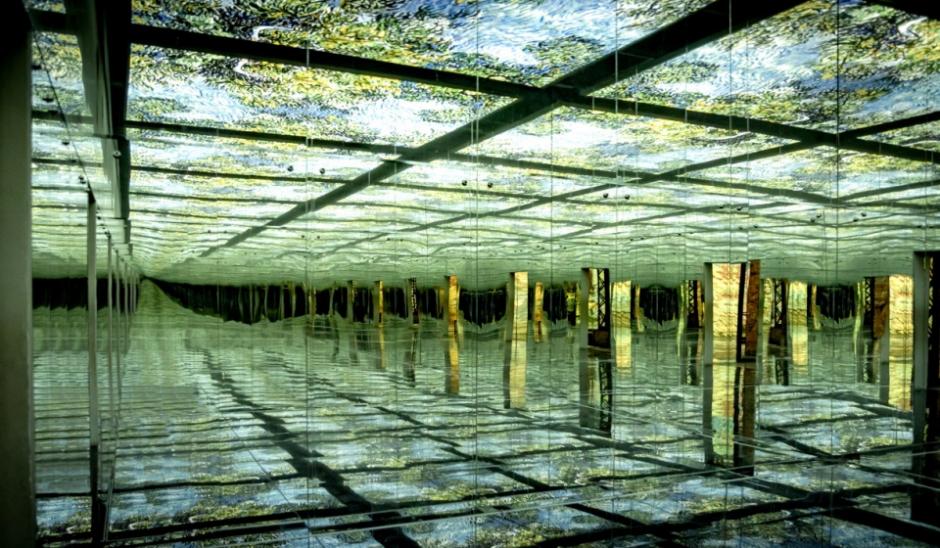 Libraries, theatres, museums, auditoriums... cultural buildings are real showpieces for the imagination. And it’s because they protect and display precious and talented books, decors, objects, sounds or performers that the design of these buildings requires special attention. Acoustic, thermal or visual protection, valorization... Immersion! 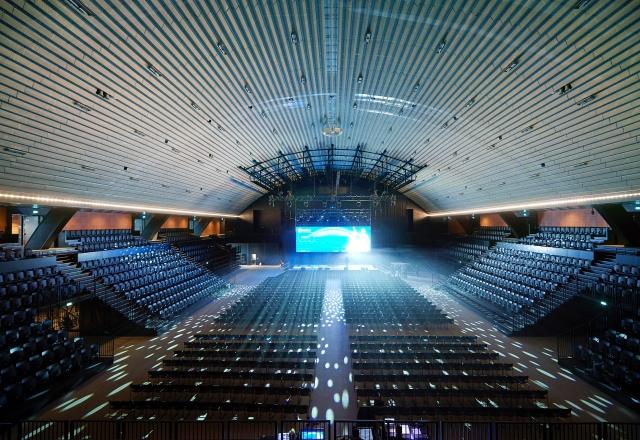 Of all the acts, the most complete is that of building.

Paul Valéry
In Eupalinos or The Architect (1923) 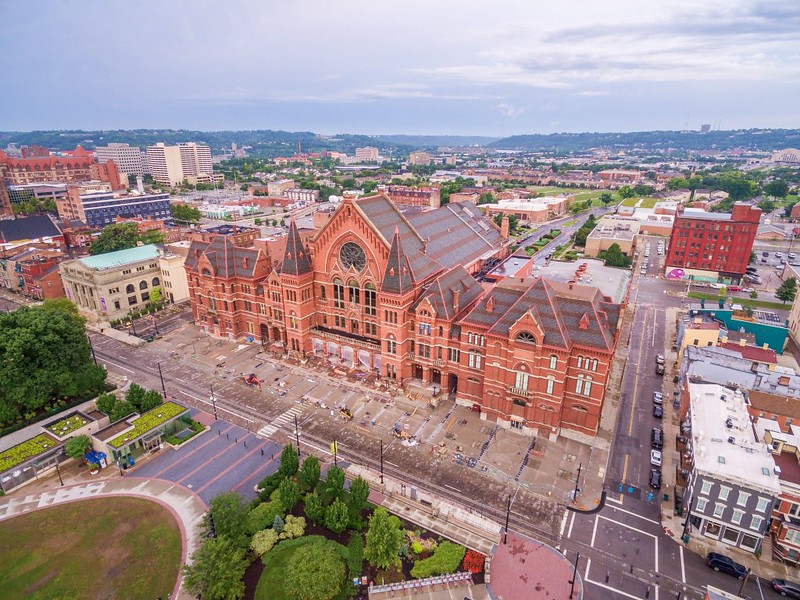 1. A glass facade that protects books

Located in Al Mamzar (Dubai), the huge Mohammed Bin Rashid Library should accommodate no less than 4.5 million books.... which can be consulted by 9 million annual visitors! A colossal building, still under construction, with forms inspired by those of a book, whose windows will be subjected to temperatures exceeding 40°C in summer (discover our story dedicated to the challenges of construction in the Middle East)

A challenge taken up by SageGlass, whose intelligent glass equips 70% of the facades. Its secret: it tints automatically during the day, which naturally regulates indoor heat and saves energy, while regulating brightness, preventing dazzling visitors - a crucial feature in Dubai where brightness can be very harsh. Finally, this intelligent glass perfectly protects the books stored in the library by blocking 100% of UV rays.

2. A spectacular balcony overlooking the mountains

In Italy, the Messner Mountain Museum in Corones sits on a summit of the Dolomites at an altitude of 2,275 metres, offering visitors a breathtaking view of the Tyrolean mountains thanks to its glass balustrade made by Saint-Gobain. This museum dedicated to the history of mountaineering was designed by the architect Zaha Hadid.

To enhance this natural setting and guarantee the view and safety of visitors, Saint-Gobain has produced many glasses in custom sizes up to 1.2 by 2 metres.

Copenhagen's legendary concert hall, KB Hallen was built in 1938. It has hosted the greatest names including Duke Ellington, the Beatles, the Rolling Stones, Miles Davis and Jimi Hendrix (who gave his last concert there a few months before his death in 1970).

Destroyed by a fire in 2011, the venue was rebuilt in 2018... and optimized to provide the best possible acoustics for musicians and the public. The solution? Gyptone Big Line 6 ceiling tiles from a partnership between Rambøll and Gyproc for an innovative acoustic solution.

Imagine an unobstructed view of the Statue of Liberty, protected from the elements... This is the request made to Saint-Gobain Glass by the new Statue of Liberty Museum, located on Ellis Island, New York City (USA).

The answer: a 400m² curtain wall of glass with high thermal comfort and a completely invisible frame. The result: total transparency to appreciate the sumptuous Lady Liberty.

In 2016, a fire devastated a large part of the Mogador Theatre's auditorium and foyers in Paris, France. As part of its renovation, the theatre's rehearsal hall was also completely redesigned.

With its 4.30 metres high ceiling, this room is a real nerve centre of the theatre because in addition to rehearsals, it hosts press meetings and musical theatre classes. With a real challenge: sound insulation. Actors must be able to rehearse without disturbing (or being disturbed) by an ongoing performance in the theatre.

To create this protective acoustics, Isover's IBR wool was chosen to insulate the 200 m² ceiling of the room.

6. An exceptional view of the horizon

On the shores of Lake Michigan, in Chicago (United States), the Shakespeare Theatre recently inaugurated The Yard, its third hall.

Designed by the architectural firm Adrian Smith + Gordon Gill, the building features a curved, crescent-shaped hall linking the two existing venues. With its 300m² hall equipped with SageGlass electrochromic glass, it offers visitors an exceptional view of the horizon while avoiding overheating, glare and fading. The glass façade is tinted according to the sunshine and reflects the surrounding landscape. In addition to optimizing thermal comfort, reducing the need and costs for air conditioning or heating and improving the building's environmental footprint, this intelligent façade adapts to climatic conditions.

7. Mirrors to immerse yourself in art

Since its opening in Paris in 2018, the Atelier des Lumières has literally immersed its 2.2 million visitors in the work of the artists on display. An intimate dive made possible by 140 video projectors, a spatial sound system and mirror cubes, known as Citernes, created in collaboration with Saint-Gobain.

They reflect the works in a unique set of lights.

In Cincinnati (USA), CertainTeed supplied the roof shingles for the renovation of the Cincinnati Music Hall, a historic monument and one of the largest concert halls in the world, with a surface area of over 23,000 m².

The objective: to recreate the distinctive striped pattern on the roof of this splendid emblematic building - and in particular the typical aesthetics of slate - while allowing it to withstand the wind, rain, snow and other climatic elements common in Cincinnati.

The solution? 600 squares of Grand Manor® shingles in two colors (fence stone grey and brown sandstone) and the addition of DiamondDeck® and WinterGuard® underlayments to enhance protection against the elements.

Taller, greater, greener. Thanks to its innovative materials, Saint-Gobain meets the most surprising architectural challenges. 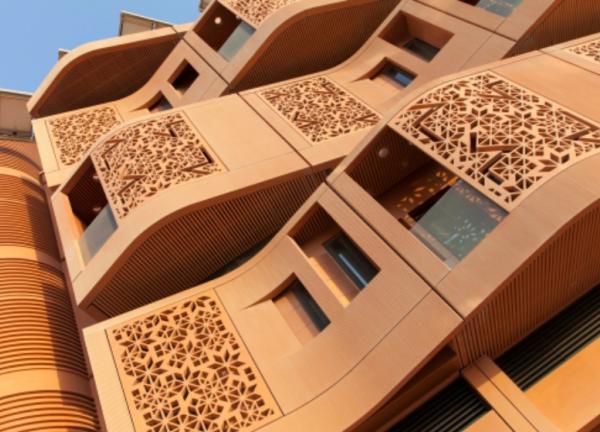 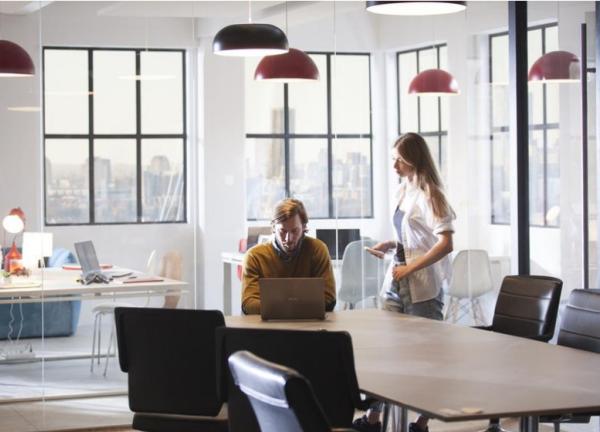