Almost 30 years after founding the Häädemeeste site, new investments have brought the expanded clay production line back on stream. 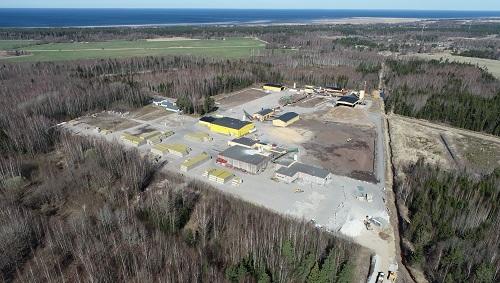 At the Fibo Exclay (a LECA brand) site in Häädemeeste, expanded clay had not been produced for almost 15 years. After the economic crisis in 2008, the site had kept its expanded clay blocks production, but imported its raw material from LECA sites abroad, such as Denmark. From now on, Estonia is taking back control of its production and expects to quickly reach annual production volumes almost comparable to those of 2007, around 350,000 cubic meters.

This investment reflects the positive dynamics of the expanded clay market, particularly for infrastructure projects (such as the high-speed train line that will link all the Baltic States to Poland in a few years' time). According to the sales teams’ estimates, half of the production of expanded clay should be sold as is, in the Baltic countries, and the other half should be transformed into blocks.

The investment represents more than €2 million, one year of work and 25 new employees (bringing the site's workforce to 41 people). Part of the investment was dedicated to the renewal of the furnace, which can now be fed with 5 different types of fuel, making production more flexible in the choice of best sustainable and economic fuel mix.

This investment is also in line with the Saint-Gobain Group's ambition to be carbon neutral, as it will enable a gradual switch to fuels of renewable origin. At the same time, the chimney stacks have been fitted with sensors that analyze combustion in order to optimize it continuously. Resuming production in Häädemeeste also means reducing the carbon footprint since the extraction of the raw material (clay), manufacturing and processing are done in Estonia, without shipping the aggregate from other Nordic countries.